I'm working on the third draft of my urban fantasy novel, The Black Book of Hours. I wrote the first draft for NaNoWriMo 2019, let the words simmer on my hard-drive for a month, and then came back for a second go. Upon reading the document from start-to-finish, I thought to myself: Genius! I'll polish it up and send it out to agents immediately! Because I am an inexperienced fool. But then I started working through the second draft and the more tweaks I made, the more I realized the entire thing needed a major overhaul. I actually think the second draft ended up being worse than the first. But along the way, I made some important discoveries that have led me to believe that the third draft? Will be the strongest yet. (I'm going to end up writing nine different drafts before sending this out to beta readers, aren't I? Yes, I am.)

It amazes me how little I knew these characters the first time around. I wrote detailed biographies for them before I started NaNoWriMo, and yet I still feel like they were complete mysteries waiting to be unraveled. I didn't even notice the primary relationship budding in-between the lines, and Black Book of Hours was originally supposed to be a paranormal romance. Ooops! When I was in the middle of cranking out the second draft, afraid to deviate too far from the original script, I kept wishing an encyclopedia would appear; in it would be all my characters' backstories: their family members, their childhood friends, their romantic interests, their disappointments from the past and aspirations for the future . . . Alas, the only one who can write that encyclopedia is me. And I've resigned myself to the fact that it'll take draft after draft after draft to get there.

But I'm an impatient author. Always have been, always will be. So I split my time between this novel (which will probably take years to finish) and short stories. Short stories give me an instant rush of gratification. You can come up with an idea in the morning and have the whole thing done and dusted by closing time. Come back a week later for revisions and formatting, and then you click that submit button and send your work out into the world. You can expect an acceptance or rejection email a few weeks later. Or, in the time of coronavirus, a notification that the anthology has been cancelled altogether.

But sometimes, I mentally over-commit to short story deadlines and lose track of what I'm really supposed to be working on: my novel. It's a problem I make for myself again and again. Right now, for instance, I'm trying to draft short stories for Black Hare Press' Lockdown Phantom #2 and Lockdown Paranormal Romance #1, while also revising my already-completed work for their Envy anthology. Not to mention this month's Dark Moments theme: Lovecraft. (How could I resist?) And then there's Eerie River Publishing's monthly short story contest. And this doesn't event take into account the deadlines coming up in early May . . .

For now, let's all just enjoy the cover of It Calls From the Forest, Vol. 2, which will be coming out mid-July and feature my short story "Dating in Murderville." I just finished reading It Calls From the Forest, Vol. 1. If you're looking for something to read around the campfire this summer (submitted for the approval of the Midnight Society), pick up a copy of this anthology. But fair warning: you may never be able to sleep in the woods again. 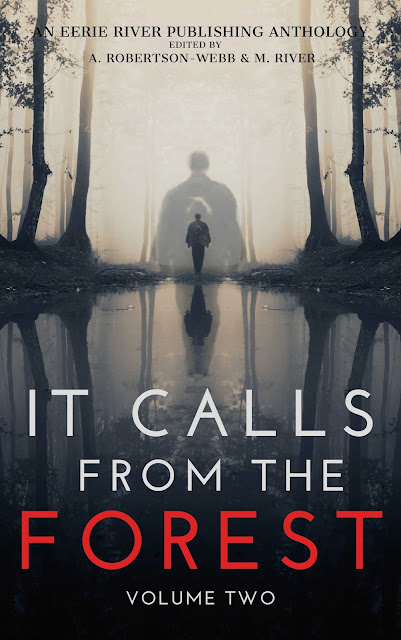